​To report someone disturbing a sea turtle nest or an injured, dead or harassed sea turtle call Wildlife Alert 888-404-FWCC (888-404-3922) or report it online. Cellular phone users can also call *FWC or #FWC, or send a text to Tip@MyFWC.com. 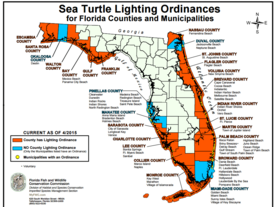 South Florida Audubon Society, based in Broward County, fosters conservation through local, regional, national, and global environmental advocacy and activities throughout South Florida focusing on birds, other wildlife, and their habitats, for the benefit of humanity and the earth's biological diversity.

This Sea Turtle Hatchling Rescuing Volunteer program would not be possible without the partnership and support of those below.

Below are links to the Fish and Wildlife Commission training materials for Sea Turtle Volunteers, and those interested. 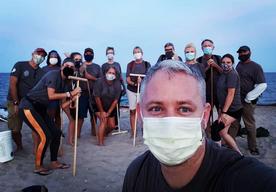 Below are links to the Fish and Wildlife Commission training materials for Sea Turtle Volunteers, and those interested.

Managing the Impacts of Dogs on Beach Wildlife 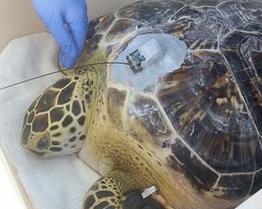 ​Every year between April and September, three species of sea turtles make their way to the beaches of Broward County: the loggerhead sea turtle, the green sea turtle, and the leatherback sea turtle. The loggerhead, however, is the species most often encountered by conservationists. The South Florida Audubon Society (SFAS) is committed to ensuring the perpetuity of this ancient marine reptile.

Due to the over-development of coastal areas around the globe, the population of sea turtles has dramatically diminished. The accidental capture and intentional poaching of this precious animal for leather, shells, and other products have also contributed to the decline of the world’s sea turtle population. As a result, six out of the seven species of sea turtles are endangered.

The State of Florida has pledged to protect sea turtles and their nests with the enactment of Florida Statutes, Chapter 370. The United States Endangered Species Act also states that "No person may take, harass, harm, pursue, hunt, shoot, wound, kill, trap, capture or attempt to engage in any such conduct to marine turtles, turtle nests, and/or turtle eggs."

Unfortunately, despite the laws in place, beach communities aren’t aware of the damages done to these sea turtle populations, and some beachfront municipalities aren’t enforcing the sea turtle ordinances. White light on beach areas disorient both the adult and hatchling sea turtles, and some nests aren’t found in time before beach-goers unknowingly harm the hatchlings.

SFAS is now taking an active role in the conservation of nests and rescuing hatchlings. Our goal is to make sure that all hatchlings from a nest make it into the ocean without disorientation or disturbance. Doug Young, Chief Operating Officer (COO) of SFAS, holds two Marine Turtle Permits from the Florida Fish and Wildlife Conservation Commission (FWC) for sea turtle hatchling rescue in Broward County.